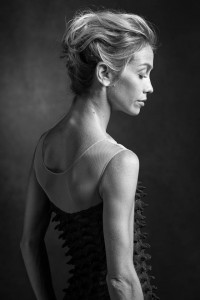 At the age of four she began studying ballet in Italy, then attended Marika Besobrasova’s school in Monte Carlo. She was chosen by Roland Petit to be “Aurora bambina” in his adaptation of Sleeping beauty, she continued her training at the Rosella Hightower Dance Centre in Cannes (1991) and then at the Dance School of the Paris Opera (1992).

She was cast in the Paris Opera Ballet in 1996. She became coryphée in 1999 and sujet in 2000, and eventually she danced as soloist in the ballet of Rudolf Nureyev (Don Quixote, Sleeping Beauty, Cinderella, La Bayadère, Raymonda, The Nutcracker), Martha Graham (Temptations of the Moon), Pierre Lacotte (La Sylphide), Roland Petit (Clavigo and Le Jeune Homme et la Mort) and George Balanchine (Emeralds). She was only twenty-one years old when she was appointed  première danseuse in 2001.

From that moment on, she considerably enhanced her repertoire by interpreting the creative works of the greatest masters of choreography such as Roland Petit, Pina Bausch, William Forsythe, John Neumeier, Jiři Kylián, Jerome Robbins, Maurice Béjart and Angelin Preljocaj. She received the Prix Danse Europe (1990), the Prix du Cercle Carpeaux for the 1998-99 season, the Positano Prize, the Audience Prize awarded by AROP in 2000, the Gino Tani International Prize in 2001 and the Barocco Prize in 2007.

In 2008 she was awarded the title of Sicilian of the Year by the President of Sicily and won the Danza&Danza Award as the best performer of the year. From 2009 to 2011 she worked as an artistic consultant at the Teatro Petruzzelli di Bari. She was directed by Maurizio Scaparro in the play Polvere di Baghdad, where she acts and dances. This play was the closing event on the occasion of the Biennale Teatro in Venice. In November 2009 Rizzoli published her autobiography. She danced on the occasion of the New Year’s Concert in Vienna, an event which is usually broadcast worldwide, with costumes designed especially for her by Valentino. In June 2010, with an official letter from the French President Nicolas Sarkozy, she was nominated Chevalier dans l’Ordre National du Mérite for her artistic achievements at the Paris Opera.

On March 27, 2013, after having danced Carmen by Roland Petit, she was appointed étoile, she was the first Italian to be awarded this title at the Paris Opera. She is regularly invited to dance worldwide. Recently she has been the protagonist of Love, a new creative work by Giuliano Peparini which was premiered on July 29 at the Parco di Nervi for the Nervi 2020 International Festival of Ballet and Music.

In April 2015 she was appointed Director of the Corps de Ballet of the Teatro dell’Opera di Roma. 2021 will be the year of her farewell to the scenes at the Paris Opera.